These are the 2016-2017 NHL Team Labels.  They include the team logo, record, final standing, playoff result, award(s), Head Coach(es), Captain(s), Arena, Capacity, Uniforms, and any other secondary or commemorative logo.  Please see the first blog post for general instructions on printing/application of the labels

This season IS currently available for purchase from Strat-O-Matic:  2016-2017 Hockey Cards and Additional Players

Neither Stanley Cup finalist was a division winner, but defending champion Pittsburgh and first-time finalist Nashville played a worthy final. When it was over, Sidney Crosby was the third in NHL history to win back-to-back Conn Smythe Trophy and his Penguins were the first repeat winner in 20 years.

The regular season belonged to Washington, which won the Presidents Trophy with 118 points and 55 wins. The Capitals had to be that good to win the ultra-competitive Metropolitan Division, which had four of the NHL’s nine 100-point teams … For the first time, four teams had win streaks of 10 or more in the same season: Columbus 16, Minnesota 12, Philadelphia 10, Calgary 10. Chicago set a franchise record with eight straight road wins.

Leading scorer Connor McDavid, the 100-point man, led Edmonton to the playoffs for the first time since 2006. Auston Mathews, tied for second with 40 goals, and his other rookie teammates led Toronto back to the playoffs for the first time in four seasons.Four goalies won at least 40 games. Surprisingly, one of them was in Edmonton, Cam Talbot. He was tied at the top with 42 wins with Washington’s Braden Holtby, who was no surprise at all for the Presidents Trophy-winning Capitals. Holtby became the third goalie in NHL history to win 40 games for three consecutive seasons.

18 cards per team, plus 207 additional players 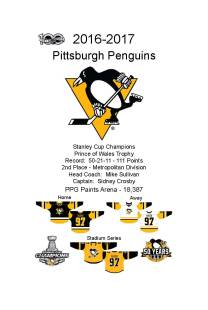 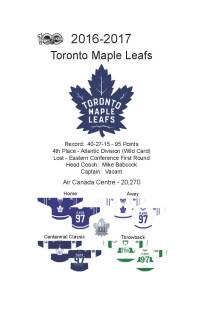