These are the 2010 MLB Team Labels.  They include the team logo, record, final standing, Playoff Result, Manager(s), Ballpark, Capacity, Weather Ratings, Ballpark Effect Ratings, Fence Height, and any other secondary or commemorative logo.  The set also includes a label for the MLB Mixed Group, which includes players who were issued multiple-cards in the set.  Please see the first blog post for general instructions on printing/application of the labels.  These labels may be revised in the future to add uniforms.

This season IS currently available for purchase from Strat-O-Matic: 2010 Baseball Cards and Additional Players

The Giants last won a World Series when they were in New York, in 1954. The Rangers had never won a pennant since moving to Texas in 1972, nor as the expansion Washington Senators formed in 1961. But in this magical season, both reached the big stage with such young stars as National League Rookie of the Year Buster Posey and American League MVP Josh Hamilton and Rookie of the Year pitcher Neftali Feliz. In the end, San Francisco’s pitching overwhelmed Texas’ lineup power.

And that was a fitting end to a season that gave us six no-hitters, including two perfect games, one by Philadelphia’s Roy Halladay. Then Halladay threw the only post-season no-hitter other than Don Larsen’s perfect game in 1956. Though batting averages and homers were lower this year, 2010 produced an array of awesome high-average sluggers, from reliable Albert Pujols and Miguel Cabrera to newer stars Hamilton, Posey, Carlos Gonzalez and National League MVP Joey Votto.

The Additional Players include the popular “total cards” that show the combined statistics for players traded between leagues in mid-season. In 2010 there are 45 total cards, including those for Manny Ramirez, Miguel Tejada, Edwin Jackson and Dan Haren. Other Additional Players include men with limited time, but may have had the at-bats or starting pitching assignments you want for a detailed season replay. 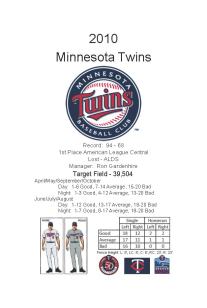