These are the 1999 NFL Team Labels.  They include the team logo, record, final standing, Playoff Result, Head Coach(s), Stadium, Capacity, Uniforms, Defensive Alignment, Defense Against Run and Pass ratings, and any other secondary or commemorative logo.  Please see the first blog post for general instructions on printing/application of the labels.

This season IS currently available for purchase from Strat-O-Matic:  1999 Football Card Set

With 4,300-yard, 41-TD passer Kurt Warner and RB Marshall Faulk (5.5 run avg, 87 catches), 13-3 St. Louis averaged 32 points. Then Warner was the first to pass for 400 in the Super Bowl. Tennessee (13-3) got there via a final-play kickoff return TD by Kevin Dyson on a lateral dubbed the Music City Miracle. Dyson had no second miracle – in the Super Bowl, he was stopped just short of the goal line as time ran out on the Titans’ 23-17 loss … Peyton Manning led the AFC in passing and Edgerrin James led in rush yards for the 13-3 Colts. Jacksonville (14-2) had the NFL’s best record with the No. 1 defense. 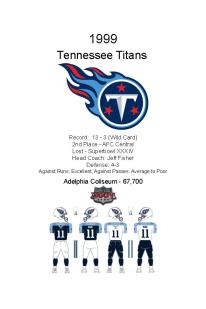