These are the 1973-1974 NHL Team Labels.  They include the team logo, record, final standing, playoff result, award(s), Head Coach(es), Captain(s), Arena, Capacity, Uniforms, and any other secondary or commemorative logo.  Please see the first blog post for general instructions on printing/application of the labels

This season IS currently available for purchase from Strat-O-Matic: 1973-1974 6 Team Card Set (with printable file)

Seventh heaven: It took seven years for one of the six expansion teams of 1967-68 to ascend to the Stanley Cup. Philadelphia literally beat other teams, with fists as well as the skill of G Bernie Parent (1.89 GAA) and Bobby Clarke (113 pts). Dave Schultz set a record with 348 PIM as the poster boy for “The Broad Street Bullies.” The Flyers won the Cup in a 1-0 Game 7 over the Big Bad Bruins, who had Phil Esposito (68 goals), Bobby Orr (122 points) and a 349-goal offense. Can’t get enough? Here’s more.

This is a 6-team set with 108 total cards. The entire 1973-74 NHL season and additional players for these teams are available on a file download included with purchase. 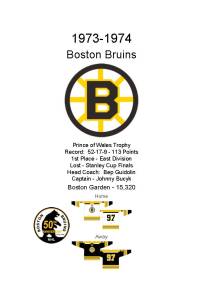 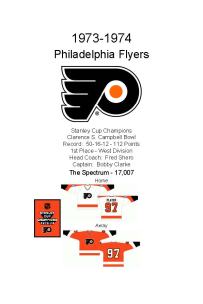 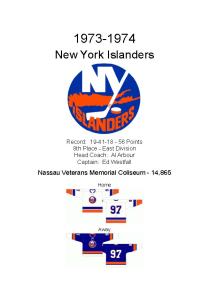